No Good Alternatives To Tumescent Liposuction

There are alternative to liposuction such as lipodissolve, but the discomfort and post treatment swelling is much worse. Also it will need to be repeated more than once, and it is not as effective. Liposuction with true tumescent infiltration is virtually painless and requires no general or IV anesthesia.

Few doctors use this technique as it was originally described. Swelling, pain, and bruising are greatly reduced.

Combine this with microcannulas and the procedure is even more effective and recovery requires less time. The results are smoother and statistically it is a safer procedure.

Many patients take only a day or two off, according to the amount of liposuction needed. I have found little indication that Vaser or laser liposuction of any kind are an improvement over traditional liposuction using microcannulas.

My experience is that they only add a new set of complications. The downside of tumescent liposuction under local anesthesia is that here is a limit to the number of areas that can be treated at one time.

However, one should consider the significant positive aspects such as diminished discomfort and recovery time.

If liposuction i needed in multiple areas, general anesthesia can be used, but the recovery time will be extended.

Even with disciplined workout routines and diet modification, there are certain deposits of fat that do not seem to shrink much for some individuals. Currently, there is no good alternatives to tumescent liposuction in terms of the relatively instant gratification.

With tumescent liposuction under mild sedation, the recovery typically is no more than few days with minimal bruising. If you are absolutely averse to liposuction, wait for Liposonix or Ultraphase (currently investigational, under US FDA review) which are external ultrasound devices that can melt fat deposit and can take an inch or two each time. (William Ting, MD, Bay Area Dermatologic Surgeon)

Beware about what you see on TV regarding these “alternatives” to liposuction. Traditional liposuction has been around for quite some time and is the safest, most cost effective, and reliable technique to remove localized areas of unwanted fat if performed by a qualified physician.

These cheaper procedures are actually quite risky and actually cost you more money and pain if you develop complications. If it is too good to be true it probably is. If you are asking for a cheap procedure, with no pain, and no downtime, it just does not exist.

In this difficult economic time, there are practitioners who do not have privileges to perform operative procedures, and therefore are promoting nonoperative alternatives.

Depending on your body habitus, if you have large areas of fat only traditional liposuction will give you the best results.

Studies are still being done to determine the effectiveness of injectable phosphatidylcholine (Lipodissolve) and the risks.

While the trendy new liposuction techniques, whether it is “smart lipo”, “laser lipo”, or any catch phrase lipo, does not remove the same amount of fat achieved by traditional liposuction.

Above all, don’t forget to do your research and see a board certified plastic surgeon. (Scott J. Engel, MD, FACS, Sarasota Plastic Surgeon)

Up until recently, liposuction using super wet or tumescent anesthesia and small canulas was the “gold standard” by which you would measure all other alternatives. In the past there has been external ultrasound, ultrasonic probes and non-surgical techniques such as mesotherapy.

However, it is a traumatic surgical procedure resulting in significant bruising, swelling and post op discomfort. Three years ago the first laser assisted liposuction machine came on the market known as Smart Lipo that uses a 1064 wavelength platform.

Results using this technique were impresive since the swelling and bruising were reduced. Skin contraction occurred.

More recently Palomar Medical introduced SlimLipo with a fat melting specific laser at 925 nm. The advantage of this machine is in the ease of use and the degree of fat melting and skin tightening at much lower energy levels thereby being a safer modality. 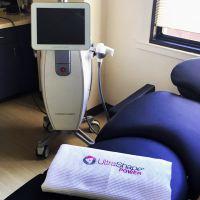 This procedure can be performed under local anesthesia through very small incisions. There is minimal bruising, little swelling and very little discomfort when compared to traditional liposuction. I am certain that new technology is being developed that will not even require an incision and use a differnt form of energy to melt the fat cells.

At this time I would vote for the Slim Lipo technology as being the most effective. (Joel B. Singer, MD, New York Plastic Surgeon)

If you are talking about something completely non-surgical, where no fat is directly removed form the body, the one I might suggest at this time is one called Cool Sculpting by Zeltiq. It is a process where the fat is frozen in order to get the fat cells to die.

It is performed in the office without anesthesia and involves no cutting or needles. It can reduce the layer of fat by about 20-24%. The end result might take a couple of months to see. (Julio Garcia, MD, Las Vegas Plastic Surgeon)

Non surgical fat removal as an alternative to liposuction

Liposuction is a safe procedure with minimal downtime compared to a tummy tuck or body lift procedure. Newer treatments such as Ultrashape are thought to expand the field of nonsurgical fat reduction by using an external device to reduce fat stores.

There are some procedres that are “coming down the pipe,” but they are not FDA approved in the US. Ultrashape is one, and Lysonix has a similar product. Thes are external ultrasound devices that may perform some fat reduction.

It will not do the same as lipsocution in one setting, and probably will require several treatments. Avoid mesotherapy of injection lipolysis because these products are not FDA approved either, and the scientific research on this topic is very thin to say the least. (Steven Wallach, MD, New York Plastic Surgeon)

None of the liposuction alternatives actually work enough to see any significant difference!

The tumescent technique liposculpting with the micro canulas are safe, easy and quick recovery with the most impressive results but it is still liposuction. Most patients go through it just fine and are amazed at how it was so different than what they saw on tv for liposuctions.

It is essentially painless and easy to undergo with patients returning to work in just 2 days. All the nonsurgical fat treatments don’t produce enough of a result to see any difference and tend to be a waste of money. (David Hansen, MD, Beverly Hills Dermatologic Surgeon)